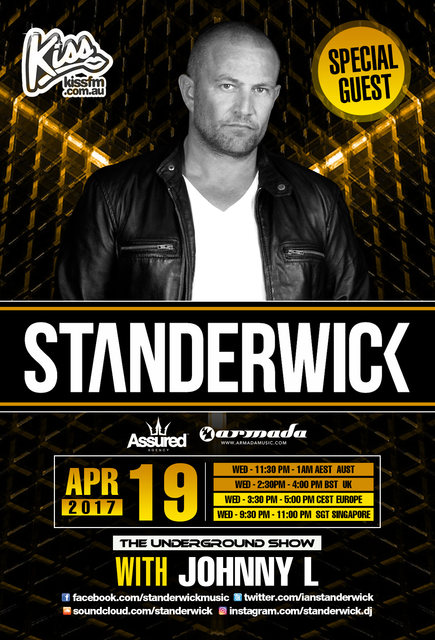 It has been quite the compelling story for this once described ‘enigmatic’ music producer and DJ from Bristol in the United Kingdom, but there is nothing mysterious about the success STANDERWICK has achieved inside the world of Dance Music to date and in such a short space of time. From his early years in song composition stemming from a professional song writing background with Zomba Music Publishing over 2 decades ago, his decision to move from writing Rock Music to Electronic Dance Music was a decision well made.

STANDERWICK has had a blistering track record in recent years which currently stands at 4 Beatport Trance No.1’s, 13 Top 5’s and 6 Top 10’s. He is also ranked as the 13th best-selling Trance producer on of all time (Beatstats Jan17) which is remarkable considering this has been achieved in just over 3 years. His familiar style of production has seen him remixing tracks for Armin van Buuren, Markus Schulz, John O’Callaghan amongst numerous other high profile artists with his remix for Gareth Emery Ft. Wayward Daughter ‘Reckless’ being voted as the 2nd best track of 2016 by the listeners of Armin van Buuren’s, A State of Trance radio show.

2016 was without doubt one of STANDERWICK’s most prolific years so far performing as a DJ with appearances across the globe at some of the world’s biggest festivals and events including, A State of Trance Toronto and Utrecht, EDC Las Vegas, UK and Orlando, Dreamstate Los Angeles, New York & San Bernardino, Tomorrowland, Belgium and Cream, Ibiza. With all these high profile shows now under his belt and recent tours of North America and Japan, all bare testament to his story of not only being a successful music producer but as evidence clearly suggests, one of the top rising and sought after Trance DJ’s in the world right now having also been voted #10 on Trance Podium’s Top 100 DJ awards 2016. With a reputation on the dancefloor as a DJ who consistently delivers the absolute maximum when it comes to energy and dynamics during his sets, STANDERWICK is firmly positioned to continue his rise through the global DJ ranks this year.

2017 is already looking like being another huge year for STANDERWICK with new music including an original track with Jonathan Mendelsohn and more remixes underway for some of the industries big guns. His latest release with Gareth Emery and Haliene ‘Saving Light’ is already poised to become one of the biggest tunes of 2017 following the huge success surrounding its release and the unbelievable momentum the track has gained so far. With preparations now underway to introduce exciting new ideas and concepts both on tour and in the studio and his most recent signing to Armada Music as an exclusive recording artist, 2017 could well be the most significant and defining year in STANDERWICK’s music career so far.