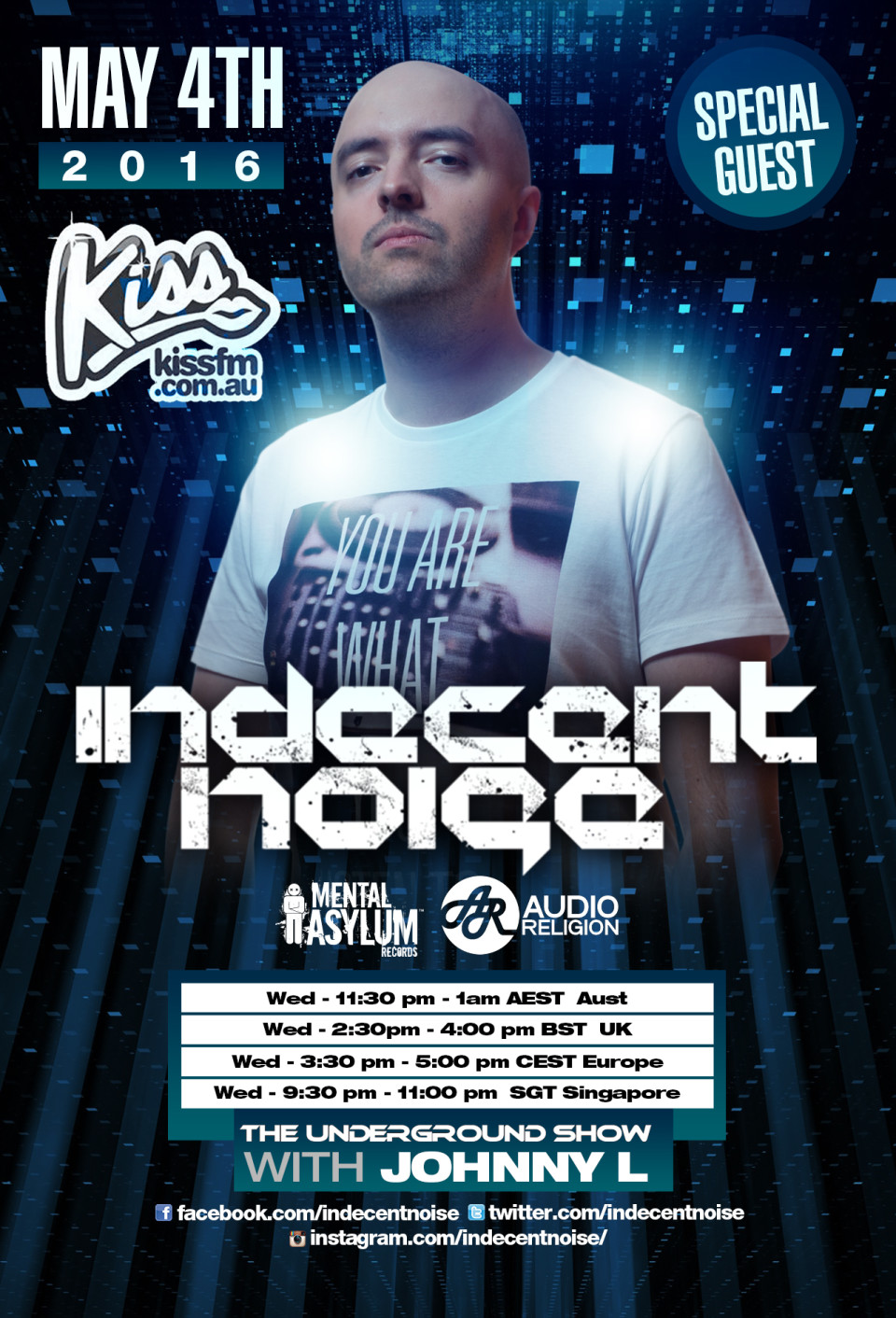 Join Us On The UNDERGROUND SHOW  Showcasing

Indecent Noise is a producer and engineer hailing from Warsaw in Poland. His sound is completely rapt in energetic and melodic trance sounds which can often use techier sounds to deliver devastating impact.  Playing live Indecent Noise fully uses the benefits of technology by using laptop and midi controllers with Ableton Live making his sets special and unique. His fascination of electronic music started at a very young age and at age 7 he was already listening to compilations from Jan Michelle Jarre and Kraftwerk. It was in 2004 he decided to learn how to become a producer himself.

We fast forward to the present day and Indecent Noise has now become one of the most consistent and hardest working producers and remixers in today’s modern trance world. His skill and ability level have improved enormously since the early days and while most of his most recent work can be found on his own label, his music has also featured on labels such as “Armada”, “Future Sound of Egypt”, “Discover”, “Fraction”, “Spinnin” and “Subculture” to name a few.

As well as being an individual artist, Indecent Noise is also the brains and the main man behind “Mental Asylum Records”. His label has become well established as a platform for showcasing the best in up-tempo, uplifting, trance and tech trance. The label not only features original and remix work from Indecent Noise himself but also material from his favourite crop of current and new producers. Having amassed over 70 releases to date, the label keeps going from strength to strength. With every release charting highly and gaining support from the majority of the trance elite it is no surprise that the label has branched off into branded club nights and festival stages.

The last few years have been massive for Indecent Noise. Releases have included tracks such as “Tremors”, “Hydra”, “Cerberus”, “Witch Hunt”, “The Darker The Better”, “Glitches”, “Daybreak”, “Lost In Noise” and “Warsaw 2.0”. Not only an accomplished producer, artists such as Armin van Buuren, Andy Moor, Signum, Markus Schulz, Solarstone, Arctic Moon and more have put his remix skills to great use. This continued production success has lead to a very busy tour schedule. As well as playing countless club gigs across every global continent he also had the privilege of being booked to play at festivals including “Tomorrowland”, “EDC Las Vegas”, “EDC Orlando”, “A State of Trance”, “Global Gathering”, “Luminosity” and “Burning Man” as well as making regular appearances in Ibiza and for global brands such as Ministry of Sound & Godskitchen.

Following on from previous years 2016 will show no let up. Already set aside are new productions and remixes fresh from a brand new studio which was pieced together in the later half of 2015. While constantly touring as an individual artist Indecent Noise continues to push his “Mental Asylum” brand to all corners of the globe also with 2015 seen the launch of “May Goes Mental”. This worldwide tour showcasing the music and the talent on his record label took various artists from the label across 9 cities and 3 continents across the month of May. With near all shows selling out we except this to become an annual concept.