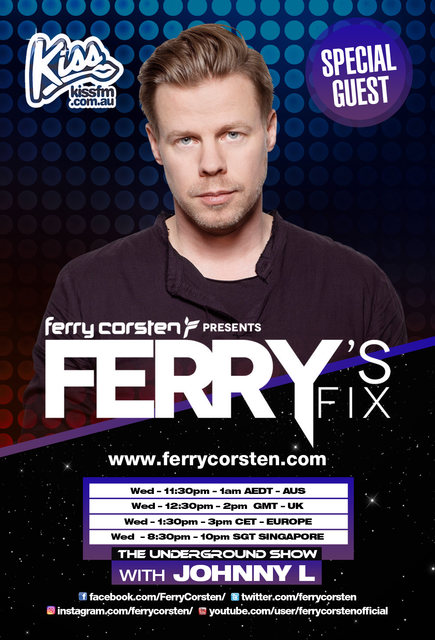 Hailing from Rotterdam, the Netherlands, Ferry Corsten’s lustrous career is exemplified by a passion for music that began as a hobby and spiralled into a full-blown profession. Today, as it was in the beginning, Corsten’s skills lie in his ability to coax the maximum emotional impact from electronic dance music of all genres, not just trance, but also progressive-house and electro. He remains and has always been ahead-of-his time, making music that becomes a template for others to follow. It was the album, Out Of The Blue, that started it all. As Corsten’s sophomoric artist album under the alias, System F, the eponymous single became a worldwide hit and charted in the UK’s Top 20 UK singles charts and Japan’s Top 10 singles charts for three consecutive years after its release. Corsten’s rapid success ignited a steady flow of releases including ‘Gouryella’ with Tiësto. It was during this time that Corsten’s remix of William Orbit’s ‘Barber’s Adagio For Strings’ became a clubland anthem. Though the instantly recognizable original appeared in the film, Platoon (directed by Oliver Stone), it was Corsten’s heady remix that took the original composition’s strongest elements and amplified them into a singular, explosive masterpiece. Offers for remix work have poured in furiously ever since, with the latest being a remix of Listenbee’s ‘Save Me’. Corsten has also consistently appeared near the top of international DJ polls and has won his share of industry awards. Over the years, Ferry Corsten has released a steady flow of new music. He has seven full-length studio albums under his belt, namely: Looking Forward as Ferr; Out Of The Blue and Together as System F; and Right Of Way, L.E.F., Twice In A Blue Moon and WKND as Ferry Corsten. These seven killer albums have yielded more than their share of Gold records, including ‘Punk,’ ‘Out Of The Blue,’ ‘Rock Your Body Rock,’ and other world-class hits including ‘Made Of Love’ featuring Betsie Larkin and ‘Radio Crash.’ More recently, the release of his three acclaimed ‘Hello World’ EPs solidified him as an ever relevant presence in trance music, demonstrating his constantly changing and mutating sound and his consistent ability to stay ahead of the curve. ‘Hearts Beating Faster’ ft. Ethan Thompson became one of most revered tracks from the EP, charting high in radio playlists worldwide, finding extended support across the scene’s biggest named spinners and to date receiving in excess of 2 million streams on Spotify. Early 2016 also saw Ferry nominated for two International Dance Music Awards – ‘Best Trance DJ’ and ‘Best trace track’ for ‘Anahera’ – once again proving the longevity of his talents. In 2006 when Corsten released ‘Fire’ with Duran Duran front man Simon LeBon, that record also became a solid radio hit. The following year, Corsten’s smash single, ‘Beautiful,’ was released to widespread acclaim, and even today that soaring song is demanded by Corsten’s audiences around the globe whenever he DJs. Early 2012 he released his latest artist album WKND, which includes a collaboration with Armin van Buuren called ‘Brute.’ That track is a current favourite with electronic dance music (EDM) lovers across the globe and has since led to various work including projects with EDM stalwarts Bassjackers and current world-beaters Dimitri Vegas & Like Mike. In 2005, Corsten launched his Flashover Recordings imprint and he spends an enormous amount of time scouring the world for fresh talent and releasing music by cutting-edge producers, giving them a voice on the world stage. Corsten has also released numerous compilations, including releases for the Trance Nation series for Ministry Of Sound, one of the more successful compilation series to date and having sold more than 1 million copies worldwide. Corsten’s own Once Upon A Night series has itself been a platform for new talent and late-breaking tunes, with volume three released in late-2012. From the outset, Corsten has been a prolific music-maker. So much so that in the early years his musical output was so plentiful and diverse that he felt the need to release music under different aliases. Those pseudonyms included System F., Gouryella (with Tiësto), Moonman and others. 2015 saw the resurrection of the legendary Gouryella, with the comeback single ‘Anahera’ going on to be one of the standout tracks of 2015 and topping Beatport’s trance chart at the year’s end. Such was the positive furore around the return that Ferry decided to breathe life back into Gouryella and bring the much-loved project from the studio to the stage. So for 2016 ‘Ferry Corsten presents Gouryella’ became a true reality, with a stunning full stage production, the live show will hit the biggest arenas and festivals in the scene. Launching the live show at the Allphones Arena in Sydney Australia on March 11th 2016, to a rapturous fan response, this eagerly awaited tour will take in exclusive appearances at events such as Balaton Sound Festival, Beyond Wonderland, EDC UK, EDC NYC and Belgium’s iconic Tomorrowland festival.