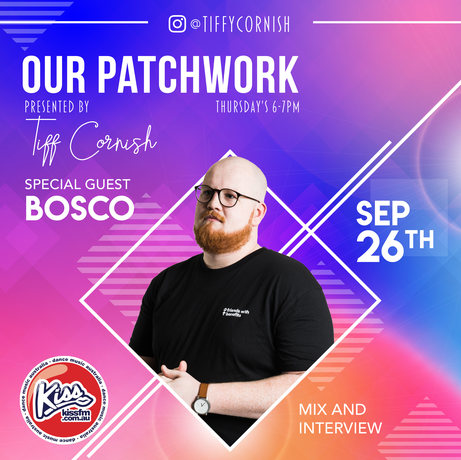 This week on Our Patchwork Tiff is joined by Melbourne’s bearded beauty – Bosco!

“With his early origins including a staple diet of a selection of disco and hip hop, Bosco’s individual style lends strongly towards those roots. Disco and Jazz infused house through to techno rompers, all bases are touched upon. Punters have come to expect finely curated sets with enigmatic twists and turns to please even the most discerning of party attendees.

Bosco has been on the Melbourne club DJ circuit since early 2013. Cementing himself early in the industry, he now holds on to many residencies and regular guest appearances at Pawn & Co, One Six One, Prince, Anyway, Circus, Glamorama, Boney and many more. On the festival front, he has made appearances at Splendour in the Grass and Strawberry Fields both in 2014 and 2016 iterations. 2016 also has seen Bosco tour interstate to Sydney and regional Victoria. Recent support debuts include Purple Disco Machine, Raffa FL, Dennis Cruz and Superlover.

Bosco proven his party throwing chops in 2015 and 2016 with his brand Friends with Benefits hosting, Audiojack, Christian Martin & Ardalan along side numerous local legends and at various party hot spots. The end of 2016 seen him take Friends with Benefits to the infamous Revolver Upstairs for a Christmas special.”