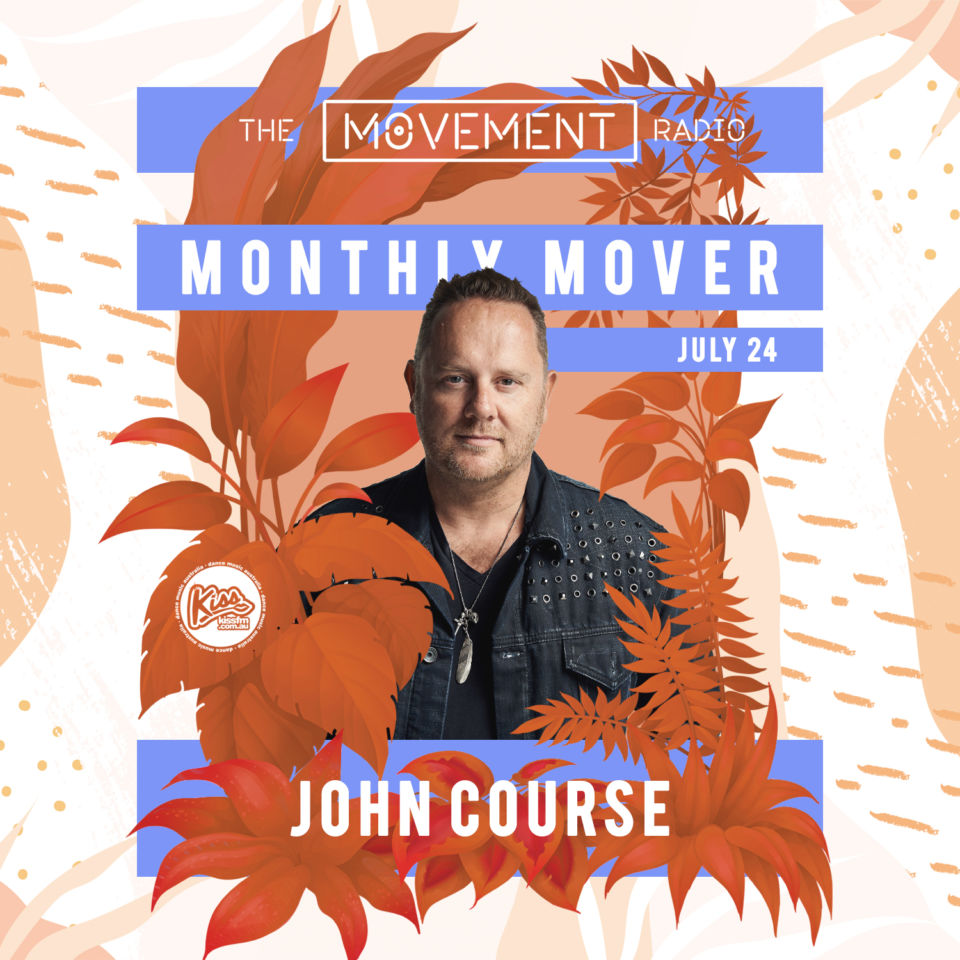 I was absolutely thrilled to have the certified legend of the Australian dance music scene, John Course, as July’s Monthly Mover. John joined me live in the studio, for a chat and guest mix.
More on John below.

Winning a couple of DMC mixing competitions is a nice way to get yourself noticed, but to still be around more than two decades later takes more than vinyl juggling skills! In the years since those Victorian DMC titles John Course has cemented himself as one of the leading personalities in Australian dance music culture.

Having been part of the house music revolution in Australia, John has mixed over 17 compilations including multiple Vicious Cuts, Ministry Of Sound’s Sessions 1, 2, 3 and 4, One Love, The 10 Year Annual plus a huge six renditions of Ministry’s yearly “Annual”. Over one million CD’s with a John Course mix have been sold in Australia to date! With a population of just over 22 million that’s not a bad percentage! Plus he has regularly indulged in the studio over the years as half of Electro Funk Lovers, under his alias J.A.C. or sometimes simply as John Course.

As one of the founders of Vicious Recordings, the label collective that un-earthed Dirty South, Avicii, Peking Duk, Madison Avenue, Sgt Slick, Angger Dimas, The Potbelleez and Vandalism, (just to name a few), John works as passionately as ever overseeing Vicious’ ever expanding business, including the original Vicious label and imprints Be Rich & Vicious Black. He is also the co-owner of Revered MGMT which specializes in finding and developing new talent.

On a DJ front John has played a multitude of events… The New Year slot at Sensation Melbourne in front of 40,000+ clubbers was one of the biggest. He also closed the huge New Years Day event Summerdays to over 20,000 people and played the main stage at both Future Music and Stereosonic on multiple occasions. A resident of super club One Love from opening night until the last record played there, he has literally DJ’d too many gigs to mention. In 2019 John plays regularly at Bond, The Emerson, OneSixOne, and Poof Doof, plus one off guests at a multitude of events.

From the skills learnt early in his career scratching and mixing vinyl, John’s technical prowess is still visible as he manipulates today’s digital sounds via a bank of CDJ’s. His musical taste is diverse, from a main stage big room set to a more intimate setting where he can often be found behind the decks at a dark little club dropping some wicked underground vibes or working his way through his extensive back catalogue. No matter the style, John is best described as simply a house music DJ.

In the age of the bedroom and promoter DJ, John’s technical skills are only surpassed by his experience in programming the right music for the crowd in front of him, which is one of the basic principles of a good DJ. It is probably that trait alone that ensures he is still in demand over 25 years after those DMC titles.