DJ / Producer JASON MIDRO is an internationally known DJ / Producer with an incredible passion for music. He has been on top of the game for many years since starting his DJ’ing career in the early ’90s.

Since those days Jason has gone on to create his own production and events company Sound Of Now Productions which ran the iconic BASS STATION and S.O.NDAZE weekly club nights for many years playing to hundreds of thousands of people.

He created, recorded and released The Ministry of Sound Hard NRG series.

Endeared and loved by many in his hometown of Melbourne, Jason has done main stage performances at some of the biggest dance party events in Australia including Summer Dayze, Gatecrasher, Two Tribes, Slinky, Gods Kitchen, Earth Core, Street Rave, Every Picture Tells a Story and Welcome.

After 14 years of absence from the airwaves, Jason Midro is back on KISS FM where he belongs. 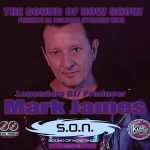 SOUND OF NOW - MARK JAMES SPECIAL | INTERVIEW | THURSDAY 29TH JULY 7PM
YOU READ IT RIGHT. TONIGHT 7PM ON KISSFM THE SOUND OF NOW SHOW PRESENTED BY JASON MIDRO IS PROUD AND HONORED TO PRESENT A VERY SPECIAL & RARE INTERVIEW WITH THE MOST INFLUENTIAL MAN IN […]
Jason Midro
FacebookTweetShareLikeTotal